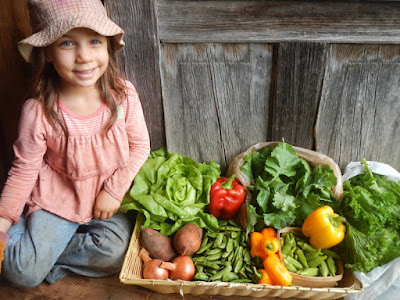 The reasons why local-organic grains have been so terribly neglected are fairly straightforward.  First, compared to most other foods, grains are relatively non-perishable, so they're relatively cheap to ship, and there aren't hardly any issues like with tomatoes or peaches of sacrificing flavor by harvesting under-ripe to withstand long-distance transport.  Secondly, from a gastronomic perspective, grains are that essential part of a meal that you normally just take for granted and don't pay any particular thought to.  Pasta dishes are defined by the sauce (or at most the shape of the pasta, which has nothing to do with the grain farming); a sandwich by what's inside; rice is just a side dish or a "bed" for what defines the meal; and oatmeal is just oatmeal.  And if grains don't get attention when they're actually on the plate, how much less attention do they get when they only made it as far as the feed trough?  From meat to dairy to eggs to farm-raised fish, there isn't a single farm animal that isn't commonly fed grain, often exclusively, and even as the great bulk of the calories in the diets of most pastured livestock and poultry.  But if you think about the farms you depend on for your eggs, do you think all about chickens or do you think at least as much about the grain fields that fed the chickens?  Grains are hugely important, but whether as feed or food they're easily overlooked by the consumer.  Thirdly, grain farming is especially highly mechanized.  Most acres of grain in America probably aren't stepped on once by the farmer's feet over the course of the whole year: only tires and steel and chemicals need to touch the ground, and that means that large scale, heavily mechanized farmers have bigger cost advantages in grain farming than in any other major farming category.  It takes a huge scaling down of modern farm equipment to meet the tiny market potential that currently exists for local-organic grains.  And finally, grains lend themselves especially well to pre-processed convenience foods. Using local-organic grains requires kitchen time.  It's much easier to slice a local-organic tomato for a tomato sandwich than it is to bake the bread for a local-organic tomato sandwich.  Local-organic grain options will require consumers to look beyond the easy habits of boxed pasta, instant rice, frozen pizza, corn flakes, etc.
So why not just be content leaving grains out of the local-organic food movement?  Here are 7 reasons we believe local-organic grains are at least as important to local-organic food as anything else, reasons that if understood should provide ample motivation to meet the challenges:

1. ACREAGE AND COMMUNITY IMPACT
Grain crops like field corn (which is corn that is harvested when the kernels are hard-dry), wheat, barley, rice, etc. account for far more acreage than fruits and vegetables.  We'd guess the difference in our county and general area is at least 100:1 if not 1000:1.  If we want to support a healthy ecosystem around us, if we want healthy soils, healthy rivers and aquifers, and if we want to foster the local food economy and build sustainable farming communities, then we can't leave grain farming out of the equation; the land impact is just far too significant.

2. HEALTHY CALORIES
Directly and indirectly (by feeding to farm animals), grains account for most of the calories the average American (besides about any other country) consumes.  If you're concerned about what you're eating and how it was grown (and what went into growing it), grain farming is hugely significant to your diet.

3. FIRST STEP TO LOCAL-ORGANIC PORK AND POULTRY
We don't see any realistic path to local-organic pork or poultry (including eggs) that doesn't begin with local-organic grain for human consumption.  If local farms can find support for local-organic grains (as cornmeal, grits, corn for hominy/tortillas, whole wheat flour, buckwheat flour, and whatever other grains can be relatively efficiently grown organically and processed on a small scale in our region), then there will be various byproducts (milling byproducts and parts of crops that for various reasons wind up unfit for human consumption and sporadic damaged crops that can't be harvested but can be fenced in for animals to harvest directly) that will go a long way to making local-organic pork and poultry feasible and economical.

4. FERTILIZER VS. POLLUTION
The present alternative to feeding farm animals local-organic feed is to raise pork and poultry and other farm animals on grain shipped in from far away organic farms or more often from farms that aren't organic at all.  That leaves problems on both ends, for both the grain farm and the livestock operation.  The grain farmer is left with a nutrient deficit from shipping away the nutrients in his grain, and the manure can become a waste liability or pollutant on the other end.  When the grain farmer replaces the manure with synthetic fertilizers highly susceptible to run-off and leaching, that can further exacerbate the pollution liability.  The natural solution to the problem is to use animal manure to fertilize grain crops, but that can only practically happen when farm animals are being raised on the same farm as the grain that feeds them (or at least in the same farming community and as part of the same farming system), and that's realistically only going to happen as consumers that value local-organic farming begin by supporting local-organic grain products for human consumption.

5. FIRST STEP TO OTHER FIELD CROPS
The equipment and facilities for growing and processing grains like field corn, barley, wheat, etc. share a lot in common with other field crops like oil seeds (seeds that are pressed for salad/cooking oil) and pulses (dry peas and beans, soybeans, etc.) and seed crops like cover crop and forage plant seed.  Growing and finding markets for true grains and grain products (like flour, cornmeal, etc.) will likely prove to be a necessary first step to local-organic farms and communities once again growing and offering and stewarding these other foods and field crops.

6. CROP ROTATIONS
Diversified farms that grow produce crops together with grain crops and forage/hay crops and animals are in the best position to practice the kind of crop rotations that improve soil health, cycle nutrients, and break pest and disease cycles.

7. NATURAL MULCH
Before produce farms were all covered in plastic, straw was the natural mulch for crops like straw-berries and many other produce crops.  Straw is a byproduct of grain farming (the leftover stalk of grains like wheat or barley or oats.)  Unlike plastic, which just adds to landfills, straw naturally decomposes, improving the soil in the process.  If your vision of an organic produce farm isn't one covered in plastic, that's one more reason to support local-organic grain farming.
No comments: 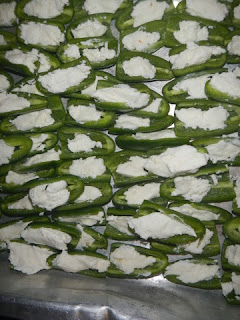 As vegetable farmers we eat and like every vegetable we grow.  Of course we have our favorites, but through the course of the year, every vegetable makes it to our plates multiple times.  Until this year we had hardly grown any jalapenos, though, and then only very sparingly found uses for them.  But by customer request, we set out a dozen plants, planning mostly just to sell them.  Mostly our family is a little shy when it comes to hot/spicy foods.  But then, as the first fruits were coming in, a neighbor took some home with him to roast with cream cheese.  Later that night, we tried the same but with goat cheese.  And the next day we called to tell him there would be a lot fewer jalapenos for him this year because he'd clued us in on a delicious way to enjoy them.  Of course, it's a pretty standard and common use, but we just hadn't ever done it before.  We had assumed the heat would be much more extreme but even our three year old wanted multiple helpings.  We actually should have plenty to share with our neighbor and with you, but it reminded us of our own journey to enjoying all vegetables, most of which we didn't grow up eating ourselves.  Maybe a new preparation of a formerly shunned vegetable will be the start of an addiction as those roasted goat cheese jalapenos have become for us!
No comments: 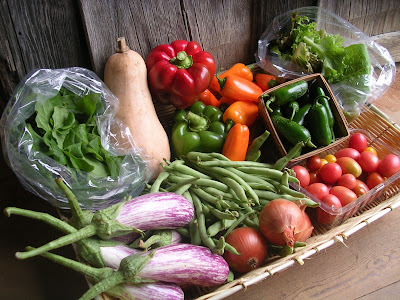