WHAT WOULD IT TAKE TO EAT A GMO-FREE DIET?

We're very much opposed to genetic engineering, particularly of crops. Beyond all the unknown risks to the animals and people that eat these crops and to the ecosystems in which these crops are grown -- risks that are as novel and unpredictable as the engineering itself -- we're just as concerned about the extent to which GMO crops take control of our food system that much further out of the hands of the local farming community and leave our fate in the hands of giant corporations that have no particular concern for -- or even knowledge of -- our communities. GMOs only facilitate larger farms with less diversity, greater demands for nonrenewable inputs and dependence on the global economy, greater accumulation of waste liabilities and pollution, and the further disintegration of human farming communities.

The list of GMO crops being grown commercially is presently still pretty short, but it impacts a huge percentage of food items. Corn, soybeans, sugar beets, canola, cotton, and alfalfa are the major crops. (GMO-Papaya and some summer squash varieties have also been released.) You may not think you eat a lot of corn and soybeans, but consider the corn syrup in your tomato sauce, the soy lecithin in your chocolate bar; consider the regular sugar made from sugar beets that sweetens whatever doesn't already have corn syrup in it; consider the "vegetable" oil in your mayonnaise and salad dressing; consider all the additives, the conditioners, "natural" flavors, thickeners, and all the other mysterious things on those long lists of ingredients. And accounting for even more acres of GMO crops, consider all the meat and eggs and dairy products from animals raised on GMO crops. Corn and soybean byproducts typically make up almost the entire diet of poultry (both meat birds and layers) and hogs. Beef and dairy cattle are likewise fed diets heavy in corn, corn silage, soybean meal, and cottonseed meal. Even the alfalfa fed to dairy cattle is potentially GMO. Even farm raised fish eat pretty much the same feed. The biggest difference between different kinds of animal feed is typically just the ratio of soybean meal to corn. That means our local grocery store wouldn't have a single cut of meat of any kind, no milk, no other dairy products, and no eggs that have any real chance of being GMO-free. Even the great majority of small farmers selling "all-natural, hormone and antibiotic-free" meat or eggs have been sucked into the GMO tide; unless they grow their own grain their options are very limited.

In just over a decade most Americans have gone from eating a completely GMO-free diet to eating GMO's with every meal of the day, and quite disturbingly most Americans don't realize anything ever changed. Should consumers really have so little involvement in and say over what they eat, let alone what impact their food dollars have on our land? We see this massive, behind-the-scenes switch to GMO agriculture as further evidence that the corporate food system is inherently untrustworthy. We think consumers would be well advised to do everything they can to regain some control of what they eat: to prepare their meals more and more from scratch, to avoid prepared and processed foods, to grow what they can, and to seek out and support the local farmers that can offer independence from the corporate food system. 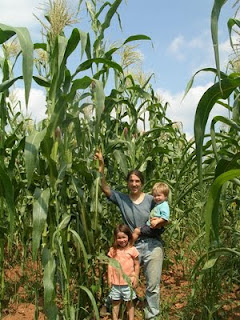 Our heirloom open-pollinated field corn stands high above us on this July day. This fall, we'll harvest the ears and let them dry in our corn crib. We will then shell them and grind them into a delicious old-timey tasting cornmeal.
2 comments:

The following blurb from an article about an organic apple orchard in western North Carolina caught our attention: "The majority of consumers think 'organic' means we don't spray with anything," Owings [a North Carolina Cooperative Extension agriculture agent for Henderson County] says, "But in fact, we actually spray twice as often, but we spray with USDA-approved materials...That's one of the reasons it's three to four times more expensive to grow organic apples than it is conventional apples. An acre of conventionally grown apples would cost $700 a season for pesticides and fungicides; an identical organic crop's price tag for organic crop protectants is about $3,400."

That example strikes us, first of all, because it's so unlike traditional organic practice. Although we would generally feel better about USDA-organically approved fungicides and pesticides than their conventional counterparts, the model of farmers or orchardists spraying nearly five times as many dollars worth of industrially produced sprays on their crops doesn't especially make organic sense to us. Shouldn't buying organic produce mean retaining more community control and keeping more dollars in the community, not increased industrial dependency?
We have to wonder why all these sprays are necessary at all. Surely apples were grown and enjoyed in North Carolina long before all the fungicidal, insecticidal, antibiotic, etc. sprays became available. What makes that traditional model of organic agriculture impractical or undesirable today? Global trade and the related spread of non-native pests and diseases may have heightened the problems, but we suspect most of the problems with the traditional organic model are a matter of practical choice on the local level. We suspect three changes are chiefly to fault for the demise of traditional organic practice:
1. Consumers generally make their purchasing choices based more on how produce looks than on what practices were used to grow it. Obviously, this is especially true when consumers have no idea what practices were used to grow a crop. Chemical agriculture has set a consumer standard of cosmetic perfection that, particularly with crops like apples, makes it extremely difficult for traditional organic practices to compete.
2. We have shifted in our eating habits more and more to pre-processed food. We buy applesauce instead of canning our own applesauce and apple juice instead of pressing our own cider. One consequence is that most of our processed apple products now come from China, where apples can be grown more cheaply (but with who knows what methods!) Really the only market left for local growers is fresh fruit, and all lower grades of domestic fruit are waste. When processing grades of apples count for zero, local growers will have that much more incentive to spray everything they can to maximize the amount of cosmetically perfect, table grade fruit.
3. Small farms have given way to the supposed economies of scale of large farms. Large farms have a natural affinity for chemical solutions, especially when the alternative is labor-intensive, and so labor-intensive, organic practices have waned. Did you know, for instance, that apples are thinned by means of chemical sprays instead of hand-thinning as used to be done?
So what does all this have to do with us? First, we want you to know how we grow and how we approach the problems of agriculture. We believe strongly in homegrown, low-tech solutions. Spraying nearly five times as many dollars of industrially produced sprays as conventional farmers is not our idea of organic. Second, we want to encourage you to think about your own role in shaping our food system. Do you more often ask yourself how does this look than you ask how was this grown? Do you take the time to process locally grown food at home instead of buying pre-processed food from far away? Do you value small farms and the knowledge and accountability that come from dealing directly with local farmers?
We have a lot to learn about apples yet, but we're keeping hope in a much more traditional model of organic farming, both when it comes to apples and everything else we grow.
1 comment:

Labels: for visitors, Get to know us
Newer Posts Older Posts Home
Subscribe to: Posts (Atom)