The future of alternative food

The last few months the kind of people that pay attention to changes in Washington, DC that are going to affect small farms have been issuing dire warnings about the rules the FDA is writing as part of implementing the Food Safety Modernization Act (FSMA).  Unlike the organic advocacy groups, our objective isn't to get you to petition the FDA.  (Besides wasting time and losing focus, petitioning the FDA probably can't hurt, though.)  Now that the FSMA is already law, our best remaining hope is to partner more deeply and directly with a tight network of customers in ways that will hopefully enable us to work around the new threats and burdens to local and homegrown ways of producing food.
As groups like the Carolina Farm Stewardship Association have highlighted, earlier regulatory burdens have already pushed most of the small-scale meat processors in North Carolina and across the U.S. out of business.  We lost our local meat processor, Johnson Meats, with whom we had dealt as far as regulatory restrictions had allowed, a couple years ago.  We're very pleased to have found another processor that will kill on the farm -- they're the last processor in North Carolina that still kills on the farm, and no new processors are being allowed to do the same -- but they're further away, they only process beef for roughly the first six months of the calendar year (much of which time is booked up a year in advance),  and we'd really be limited if they, too, went out of business.
The FSMA is designed to bring that same kind of pressure on the one major remaining food sector that was until now mostly free to bring homegrown style food to farmers' markets and otherwise sell to the general public, namely fresh produce.  The battle for selling homegrown style produce freely to the general public isn't over yet -- it will take a little time -- but the writing is on the wall with the FSMA, and we can be sure that battle is lost.
Of course, it's well worth noting that the foodborne illness episodes that prompted the passage of the FSMA -- here's a CNN overview: The decade's 10 biggest food-borne illness outbreaks -- were all from very large-scale producers such that individual farms sickened people all across the country and a half billion eggs, 30 million pounds of sliced deli meat, etc. were subsequently recalled... yet, the FSMA created a regulatory system that will disproportionately advantage the kinds of operations that caused these outbreaks while pushing the small-scale alternatives out of business.  One might blame corporate influence on the Washington system, but more fundamentally Washington control is simply a lot more compatible with large corporate operations than lots of small, diverse farms.  In any case, the FSMA is now law and customers now face an imminent threat of losing the one good, relatively easy connection they have with a locally controlled alternative agriculture, namely produce.
How can the local food movement hope to survive without being able to easily sell produce?  Like we said above, we think the answer is solidifying the gains the local food movement has made in the last 10+ years by deepening the relationships that already exist between small farms and their patrons.  Going forward it's going to be much harder for the small farms that offer substantive alternatives to the mainstream corporate food system to build connections with new customers, but there's hope in the connections we've already built, and that's a place from where we might slowly grow.  We lost a major battle when we gave Washington the power to define Good Agricultural Practice (which now goes with sinister capital letters and the acronym GAP), but we believe moving beyond the superficial freedom of supermarket style consumerism to real partnerships between consumers and local farms offers the best hope to continue to pursue alternative ideas to good agricultural practice, ideas that aren't just minor variations on 30 million pounds of recalled deli meats and all the other many ills of corporate-industrial agriculture beyond the foodborne illnesses.
No comments: 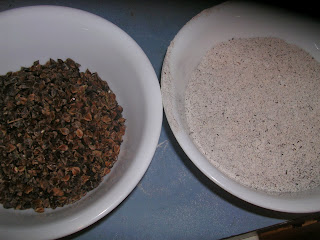 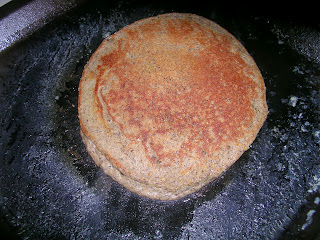 Grains have been a limiting factor for us in eating a totally local diet.  While we do enjoy a good bit of our corn and we've grown wheat, we still buy in a hefty amount of oats, wheat, millet and buckwheat each year for ourselves.  We were excited to discover, therefore, that homegrown buckwheat is a very doable endeavor.  We've grown buckwheat as a cover crop in the gardens for years.  This year we harvested a couple quarts of the buckwheat after the flowers had gone to seed.  These seeds we winnowed, then ran through our mill, hull and all.  When you buy whole buckwheat groats, they are often dehulled.  But we've discovered that buckwheat flour must be milled from the whole grain, giving it the characteristic dark flecks from the hull.  We did sift the flour we ground through a coarse sieve to get out the largest flecks of hull.  From there we fried up a delicious batch of buckwheat pancakes for breakfast topped with our Jersey butter and sorghum syrup from a friend.  Eating local doesn't taste any better than this!
No comments: 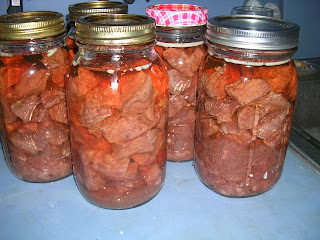 This may not have been the same deer that nibbled on the garden this year but it is satisfying (and delicious) to know it sure won't be nibbling again next year.
No comments: 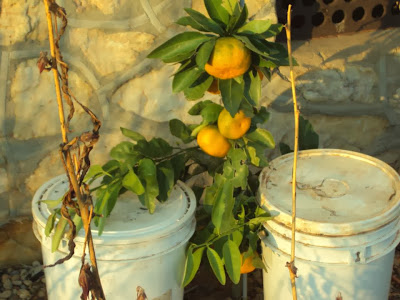 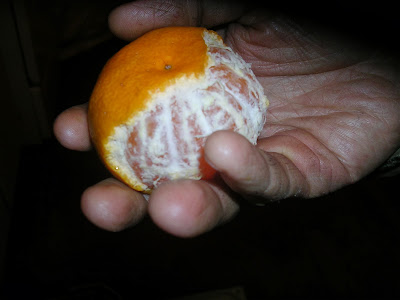 A good spot on the south side of our house and a little added protection on the coldest winter nights was about it all it took to produce our first delicious little crop of satsumas.  We don't really understand the taxonomy, but our understanding is that satsumas are very similar to but not the same as tangerines, clementines, and mandarin oranges.  In any case, they're an outstanding fresh eating fruit.
No comments: 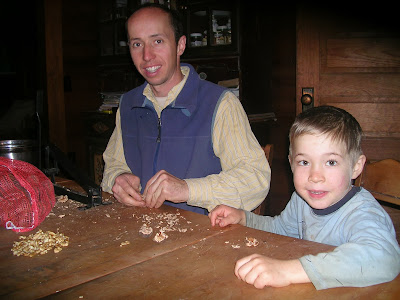 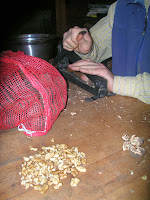 Local pecans are in short supply this fall, likely due to the wet spring and summer.  The pecan farmer in Rowan County we normally get a good quantity of in-shell pecans from said there wasn't even enough pecans at his place this year for the squirrels.  Not having a local source for our usual staple nut has definitely added to our recent interest in black walnuts.  These we can source even more locally - from trees already growing wild on our own farm.  With the kids on board, feed sacks worth of walnuts were picked up from under two of our trees this year.  Word got out and a neighbor brought over a few more feed sacks full.  The hulls were rubbed off and the nuts washed.  Then we hung them in feed sacks to cure.  Now a little bit at a time, we're cracking them.  Many of them are shelling out with relatively large pieces.
No comments: