[We wrote the following 2 years ago. The same story is currently repeating itself with a different food (tomatoes) and a different bacterium (salmonella).]
You’ve all heard about the spinach contaminated with e. coli by now, right? Several days later the FDA is still advising that no one eat any spinach anywhere in America, because they haven’t been able to identify the source of the problem yet. One of the suspected culprits was apparently a processing plant for “certified organic” spinach. This particular plant apparently processes 63,000 servings of spinach each day from 150 farms. Somehow, somewhere, at this processing plant or maybe somewhere else, a whole lot of spinach came in contact with fecal contamination from some person or some animal. One person is dead and over a hundred are ill from Minnesota to Arizona to Oregon. So what is safe food? Is there something wrong with the system that produced this spinach?
One approach to food safety is to illegalize fresh food, like America has done with milk or apple cider or cured meats. We could mandate that all food be sterilized in industrial pressure cookers. No more fresh spinach. If food contained fecal matter, it would be sterilized fecal matter. If vitamins or other nutrients were destroyed, we could try to figure out what pills to give people in their place.
A compatible approach would be to increase regulation and inspection, like we’ve done with butchers, dairies, wineries, and other value-added operations. The trouble with that approach is that it puts small producers and processors out of business (which tend to be the highest quality producers.) The more special equipment and facilities and inspectors we require, the bigger the operation needs to be to justify their cost. And so we wind up with huge, untraceable problems like with the spinach, not to mention the bland uniformity of the food, the death of local farming communities achieved by putting farmers out of business, substituting menial jobs that only illegal immigrants will take, reliance on drugs and chemicals, soil erosion, the pollution of waterways, etc.
So what do we think is the best answer to safe food? We think the answer is smaller rather than bigger. We think the answer is closer to home and more visible rather than far away and out of sight We think the answer is involvement rather than pure consumerism. We think the answer is farmers that share their own surpluses with their neighbors rather than low-wage immigrant laborers in massive processing plants. We think the answer is more care and better stewardship rather than sterilization and irradiation.
No comments:

Labels: Get to know us 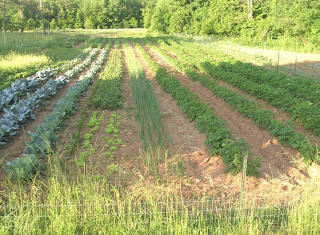 A place for children 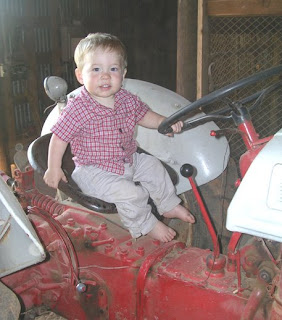 While working on a farm project the other day, Eric commented, "Do you think we're too wrapped up in our career to have time for the kids?" Especially this time of year, when there is everything to do on the farm, it seems there's not even time to read a book to Nora and Paul. But in truth, the kids are never far from us, many times enjoying our "workplace." That day, in fact, Nora had led Paul into the strawberry patch and was picking "all the way red" berries for him to eat.
We've been amazed to see how much Nora, now three, is capable of and how much she really understands about the farm. She helps water the newly planted fruit trees, plant seeds, gather eggs, and she'll milk herself a cup of milk while we milk out the other quarters. She peeks in the incubator to see if the chicks have hatched. When it's time to squish potato bugs she knows which bugs are the good ones and which are the bad ones. And she knows we should share the harvest with the people at the market, because we're growing too much to eat ourselves.
We mention all this to say that we believe a farm that has a place for children is the kind of farm that benefits more than just children. When we advertise that we sell "good, honest, low-tech food," we're saying much the same thing. Children can help crush potato bugs with their fingers, but you wouldn't give children sophisticated insecticides to dust on the plants. Of course, there are plenty of tasks on any farm that aren't for children, but keeping a place for children on the farm -- like maintaining a connection between people and the source of their food -- is an important part of a healthy, balanced farm.
No comments:

Stacking up - the spring honey flow 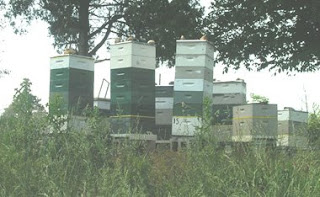