What's Happening on the Farm

With the sweet potatoes all out of the ground, we're now starting to sort them.  First we set some aside for "seed" for next year.  When planted in our cold frames in early spring, the sweet potatoes will send up lots of "slips" which we then plant.  Even though we have many bushels of sellable potatoes, there are also plenty of tiny, cracked, etc. potatoes that have us thinking we ought to finally get started with a couple pigs.
We've also been working on pulling the peanuts off the vines.  After digging the vines we brought them (peanuts still attached) to one of our buildings where we pull the peanuts off.  The peanuts are then put on trays to dry.  We then feed the vines to Elsea our cow.
We finished planting strawberries a couple weeks ago, expanding a bit from last year.  The neighbor farmer brought over some straw for us to mulch them.  This is especially important for keeping strawberries clean.  The mulch is also great for weed control and eventually organic matter for the soil.  Now going on to our fourth season here, we are starting to see the regular additions of mulch and manure, along with cover crops, making a difference.  We also finished planting the garlic, shallots and multiplier onions.  We expanded this patch too!  We're hopeful the multiplier onions will give us plenty of spring onions come early spring.  We've also been planting the fields that don't have fall or over-wintered crops to cover crops.
During this recent warm weather we've seen a good bit of bee activity on asters, small white or purple wildflowers.  We were hopeful the bees were getting some winter honey stored for themselves from it, but it seems it has barely helped them hold their own.  It's definitely time now to feed the colonies that didn't maintain sufficient stores to make it through the winter.  Although we had a very good honey crop, it came early and was very short, so it's been a good five months since the bees had any opportunity to get ahead.  Summers are very typically discouraging, trying just to limit losses from queen problems, starvation, disease, robbing, etc., and knowing that the next real opportunity to make honey isn't until next May.  At this point we're hoping just to hold on to as many hives as we had this year for next year.
We ended up with only one goat in milk this summer.  Now that we have a bit more time, we've been milking her once a day and making a simple cheese for ourselves.  Our other cow, Mary May, is due at Thanksgiving.
We're certainly looking forward to winter.  But to keep ourselves disciplined we have a few projects we hope to get done, including hooking up a wood stove, building fences, shoveling out and spreading manure, building grape and kiwi trellises, reconfiguring the chicken fences around the gardens, assembling and cleaning up bee equipment, sorting and shelling and winnowing corn for cornmeal, planting trees, pruning, maybe building a greenhouse, building/setting up some basic infrastructure for a couple pigs...
2 comments: 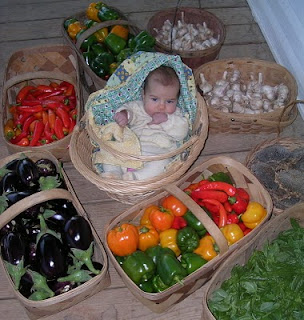 Look what I found in the garden 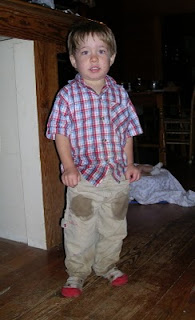 Paul  said the grass got his pants wet.  Upon further inspection, we found them filled with muscadine grapes!
No comments:

It's almost too late to be sharing an okra recipe, but maybe you stocked up your freezers with enough okra to keep trying new okra recipes all through the winter. We've certainly had a bounty of okra this year. Maybe we shouldn't have planted that extra little row in the triangle garden. Now that the okra plants need to be bent over to be picked and are still growing strong, Melissa might confess -- Eric never! -- that she's gotten a bit tired of okra. We've sauted it, stewed it, roasted it, and fried it. Then a week ago we discovered a new way to cook it. Okra fritters! Suddenly, we weren't sure we'd frozen enough okra to keep us in fritters for the winter. We're nearing the end of the okra season, so enjoy some now and make sure you are stocked up for the winter, too.

1. In a large, heavy skillet, heat oil over medium. In a medium bowl, combine flour, 1/2 tsp. salt, and 1/4 tsp. pepper. Add okra and onion and toss to coat. In a small bowl, whisk together egg and buttermilk. Add to okra mixture and stir just until combined.

2. In two batches, drop batter in 2-tablespoonful mounds into oil. With a small spatula or butter knife, gently flatten each mound and fry until golden, about 4 minutes per side, flipping once (adjust heat if browning too quickly). Drain on paper towels. Season with salt and serve warm.
No comments: