The Statesville Record and Landmark recently wrote a story about our farm:
http://www2.statesville.com/news/2010/sep/25/low-tech-farm-produces-little-bit-everything-ar-419219/
No comments:

We heard a couple interesting statistics and stories recently that spawned some thoughts on global commodity markets. The first story had nothing directly to do with agriculture. An economist was talking about what impact proposals that would increase domestic oil drilling would have on oil prices. The economist made the point that no matter which course we took oil would remain a global commodity product dominated by OPEC. In other words, talking about increasing domestic production by 5 or 10% of domestic consumption missed the reality that there is no domestic oil market; rather, the U.S. is just one piece of a global market. Americans would make an impact on domestic prices only insofar as we could make an impact on global production, because domestic prices are determined by and are a part of a globalized market. Of course, that's just one small part of the story of American oil use, but it got us thinking about parallels in agriculture. Corn and soybeans and wheat and cotton are similarly global commodities nowadays. Of course, not all corn and wheat are part of that global market -- the wheat we grow for ourselves or the heirloom cornmeal we've sold at the farmers' market are anything but global commodity products -- but the overwhelming majority of corn and soybeans and wheat grown in America are bought and sold into the same global market that China and France and Zambia and Brazil belong to. Wheat prices are high in America right now in part because of wildfires in Russia. That's true even if you're buying commodity wheat from a farmer half a mile down the road, because that transaction still takes place in the context of a global market. With all that in mind various stories and tidbits we've heard recently about Brazil particularly intrigued us. One story was about the low cost of production for an Irishman farming commodity crops on several thousand acres in Brazil. Eric hadn't even realized that soybeans could be grown in Brazil's climate, and then we find out that Brazil recently overtook the United States as the world's leader in soybean exports (and was already the world's largest beef exporter.) We remember ten or twenty years ago when saving the rain forests was as prominent an issue as global warming is today -- the kind of thing elementary school children everywhere were teaching their parents -- but while the rain forest issue lost our attention, Brazil doubled the amount of land planted to soy in the last decade. The global soybean market that's propelling these dramatic changes on the Amazonian frontier is the same market that we give a little push to every time we buy a tub of Crisco, a gallon of biodiesel, a book printed with soy ink, a bar of soap made from soybean oil, chickens raised on a standard diet of corn and soybean meal, soy-based pharmaceuticals, soy-based candles, crops grown with soy-based pesticides and fungicides, farm raised fish, etc., etc. Our response is to echo Wendell Berry when he wrote: "We can't go on too much longer, maybe, without considering the likelihood that we humans are not intelligent enough to work on the scale to which we have been tempted by our technological abilities." On smaller scale farms with free range chickens soybean meal was entirely unnecessary: chickens could find their protein in the form of grubs and worms. Instead of field crops, hogs used to be raised largely on diets of acorns and table scraps and crop residues that now go unused or contribute to landfills. Soybean meal has proven significantly cheaper, at least in the short-term and if we don't account for any of the indirect costs (like costs to our health, loss of rain forests, loss of community self-sufficiency, etc.) We see a tremendous value in maintaining and rediscovering and developing alternatives to our broad dependency on commodity soybeans.
1 comment: 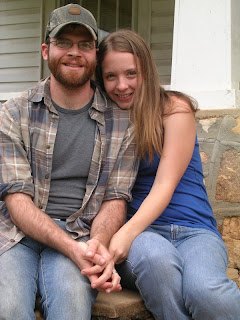 We just signed up as a host WWOOF Farm a few months ago but have been blessed with "willing workers" since.  Shane and Sarah spent two weeks with us, the start of a series of WWOOF farm visits for them.  We are grateful for their help!
No comments:

We're at another small turning point this week with the first of the fall greens ready to harvest. Despite the first taste of fall crops, we haven't really had much fall weather yet, certainly not if you look at the daytime high temperatures. That's making for a slow start for fall crops that germinate and grow better in more moderate temperatures. If the hard winter weather holds off long enough, there's still time for a lot of the fall crops to make, but we surely won't have as much as early as we would in a more average year. There are still several of the summer crops that are maturing meanwhile. We started enjoying this year's crop of popcorn this week. Our first batch of creamed honey was ready last week. Some of the earlier maturing sweet potatoes are sizing up already, but we're still looking forward to some of our favorite baking varieties. (We think some of these early varieties make great sweet potato chips, though.) The peanuts are looking pretty good, and we plan to harvest those sometime next month. The growing season is definitely nearing its end, though.
The last two and a half weeks have made for the longest dry stretch we've had all year. For now, we're holding off on planting strawberries until we can see a break in that pattern coming. All in all, we've had more regular rainfall through this growing season than we can remember in any of the last few years, though.
Last year we started talking about the years as the year of the beans and bell peppers (2008), the year of the tomatoes and sweet potatoes (2009), etc. This year will have to be the year of the strawberries and the Mexican bean beetles. (Not a good bean year!) We probably had more strawberries and more bean beetles than we had in all the previous years (since we started selling in 2004) combined. Besides the strawberries, we were also well pleased with the garden peas and lettuces this spring. The onions -- which we're about to the end of -- also held out to produce a surprisingly nice crop this year. Although only a minor crop for us, the pumpkins and winter squash did quite well this year. We need to find more ways to use these pumpkins than just desserts and soup! We're excited about all the different varieties of winter squash there are to grow and want to grow more next year.
Although our number of bee hives was a little down this spring, things went very well in the bee yard, and we had what was probably our best per hive average yet. The honey flow was early, short, and intense, but fortunately we were able to build last year's nucleus colonies up in time to make an excellent crop. There wasn't any summer crop to speak of this year, but the bees seem to have held their own through the summer pretty well, and we feel pretty good about the way things look heading into winter, even though we never much know what to expect: there are just so many variables when it comes to bees.
If you've asked for eggs the last few weeks, you know that our supply of eggs has been very limited lately. That's mainly due to the normal seasonal cycle. We actually reduced the size of our laying flock this spring, because we were having trouble selling all our eggs, and now it's quite the opposite. It will probably be January or February before we see egg surpluses again, but we hope you'll remember our eggs then.
We're continuing to learn and improve on our management of the pasture and our cattle and dairy goats. One of our Jersey cows is bred to a Jersey bull and due to calve Thanksgiving Day. The other is maybe too old to successfully breed again, but we hope she'll keep milking for a long time anyway and maybe provide an opportunity for some more veal early next year. Our little herd of Saanen dairy goats is up to four now, although just one of those kidded and is in milk this year. We're slowly trying to increase there.
We're increasingly optimistic about the prospects for selling a full variety of local, organic fruit. We were able to pick most of our blueberries off our own bushes this year, and the bushes are still just getting going. Our little orchard that we planted in the fall of 2007 when we first moved to Iredell has already yielded its first apples and pears. We've especially been enjoying figs and Asian pears lately, and we found our first ripe persimmon (from a delicious wild tree) this week.
No comments: