What's Special About our Honey 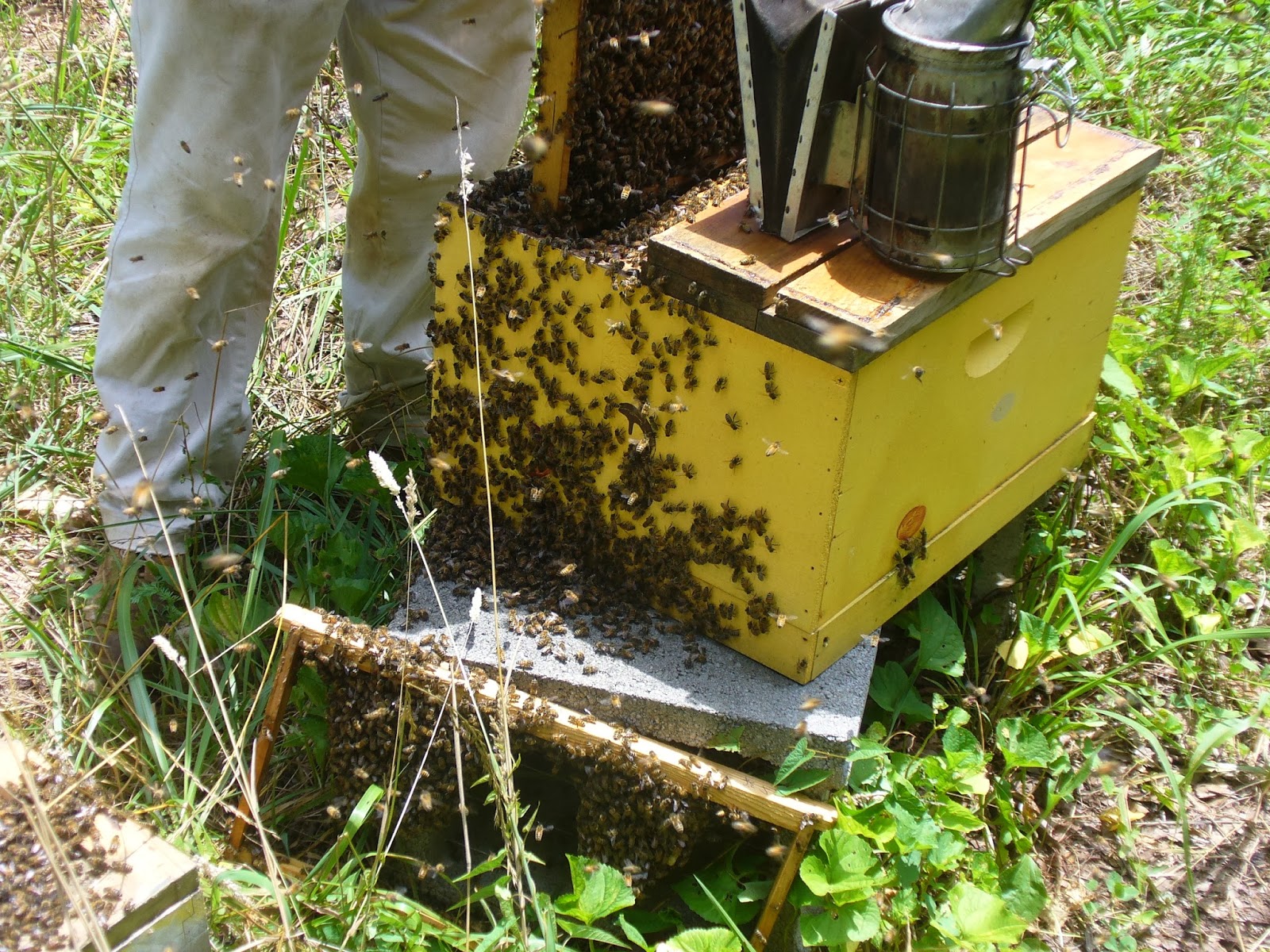 Honey is, of course, naturally a very special food, but what most readily sets our honey apart from other honey you might find are our efforts to preserve honey's natural goodness.  As in almost every other field of agriculture, there are a lot of chemicals and pharmaceuticals commonly used in bee hives and in connection with honey production: a couple different antibiotics, various synthetic pesticides including one of a particularly toxic class of pesticides called organophosphates, chemical fumigants, chemical repellants, as well as flat out illegal substances never registered for use in bee hives.  We use nothing of this sort in connection with our bees or honey.  We can’t prove that any of these things is harmful, but we believe there are always risks with these sorts of things, not just for us as honey consumers, but for the long-term health of the bees, for other species in the ecosystems where these chemicals are used, for the people that handle these chemicals, for the people that drink the water downstream from where these things are manufactured, etc.,etc.  We strongly believe that it's not prudent to directly contribute to these risks in our own beekeeping.
Some of honeybees' recent problems brought about by global trade (introducing exotic pests and diseases) made it extremely challenging for beekeepers to keep their hives organically, especially when the mites first hit North America, but as with the rest of agriculture, many of the chemicals and pharmaceuticals used in bee hives are used mostly for convenience and marginal cost/labor savings.  Butryic anhydride, for instance, is a nasty smelling chemical repellent used to drive bees out of honey supers when taking supers off the hives.  Instead of repellents, we place escape screens below our supers a day or two before harvesting.  (An escape screen is a wooden board with a built in maze that works as a one-way exit, allowing the bees to exit the supers but not return.)  Paradichlorobenzene is a chemical used by beekeepers to fumigate stored supers to prevent wax moth larvae from ruining the combs.  It's illegal in some places due to carcinogenic concerns, but it's very widely used in North Carolina and elsewhere.  Instead of using PDB, we keep susceptible combs (combs that have had brood reared in them before) separate from our honey combs, and leave the susceptible combs on hives where the bees can keep pests out, or we'll expose combs to sunlight or cold to deter wax moths.  These are really pretty easy management practices, but chemical use is the norm, and most beekeepers are so comfortable with chemical use that they wouldn't bother to avoid it.  Antibiotic use follows a similar pattern of comfort: many beekeepers simply feel “safer” having given their bees antibiotics (and other medications) than not.  Some antibiotics, like for nosema disease, have little hard evidence to even prove their limited usefulness.  Other antibiotics, like for foulbrood, are potentially effective, but antibiotic use is leading to antibiotic resistant foulbrood, which is leading to the use of stronger and riskier antibiotics.  Foulbrood is infrequent enough that we can pretty easily deal with it through careful inspections and the occasional burning of infected combs and equipment.  Even more disturbing than the use of these and other approved products is the use of chemicals never approved or tested for safe use in bee hives.  For instance, beekeepers have found that paper towels can be soaked in chemicals used for de-lousing cattle and placed in bee hives to kill mites.  Some of these practices have been encouraged by price gouging by chemical companies or the very high regulatory cost of chemical registration.  Roach poisons are used in hives to kill small hive beetles.  Authorities sometimes destroy foreign honey imports because residues of dangerous drugs are discovered.  We're concerned enough about all these kinds of chemical residue problems that we no longer even use beeswax “foundation” in our frames -- something that's been standard practice in beekeeping for well over 100 years -- because it would indirectly increase our exposure to these chemicals.  We distrust the whole mess of chemical and pharmaceutical agriculture, and we're committed to avoiding what we see as all these foolish risks.
No comments:

Labels: Get to know us

We've noticed farmers increasingly using the word "sustainable" as a label to say that their farm products are organic without actually using the word "organic." On the one hand, we sympathize with farmers that want to take a less legalistic approach to the meaning of organic but still want to communicate their commitment to organic principles. In an industrialized society industrial compromises of one sort or another are inevitable, and we see real dangers in oversimplifying those questions. We certainly don't like the way defining "organic" by a set of rules has encouraged a race to the bottom of that very limited standard. And we don't like the way third party certification has apparently displaced the need for real knowledge on the part of the consumer: knowing where and by whom and how food was -- and was not -- grown.
On the other hand, we see farmers and consumers using words like "sustainable" or "naturally grown" or "certified organic" to describe food and farming methods with very little organic integrity. This especially concerns us when such sentiments lead to complacency with compromises, as if a little window dressing were the final answer to the very real, persistent problems of industrialized agriculture. If we know anything about organic agriculture, it's that we as a society each and all have a long, long, long way to go.
Misuse of organic and pseudo-organic labels seems especially pronounced when it comes to animal products. Hogs or chickens raised on every bit as much genetically modified, pesticide-intensive grain as on conventional farms are labeled "sustainable" or "naturally grown" simply because antibiotics are withheld and they're given some kind of token access to the outdoors. The most important and basic part of what makes an animal product organic would have to be what that animal eats, and yet this is where "sustainable" most often fails to deliver any substance. Conventional farms are fittingly derided as just CAFOs (Confined Animal Feeding Operations) and yet it's hard to see so-called "sustainable" farms as very different when the animals are just as dependent on the very same industrial feed machine.
To put things in perspective, of the over 30 small farms we know of in North Carolina that sell what's commonly called "sustainable" pork, we only know of two that don't feed genetically modified grains to their animals, and they only accomplish that by replacing grain with milk (in one case with milk from cows fed genetically modified grains.) Likewise, besides our own flock, we don't know of a single remaining chicken flock in the whole state that's fed locally grown, non-genetically modified feed -- what we would consider only the most basic first step toward a separate system of raising animals. (Crops are most commonly genetically modified in order to facilitate expanded options for spraying synthetic herbicides on the crop.) We recently called Whole Foods, the biggest "natural foods" grocery chain, to ask what meat they had from animals fed organic or even just non-GMO feeds: all the pork and poultry and other non-ruminant meats they had, with just one minor exception (some certified organic frozen chickens), were from animals raised on conventional, pesticide-intensive, genetically modified grains. There's clearly a tremendous gap between the marketing talk and the reality.
We hope that as a first step consumers (and farmers) can confront the realities. The last thing we want is for our customers to indignantly run off and hide behind another empty buzzword. Apart from an informed relationship of trust with the farmer, the only label that we count for anything is USDA certified organic, and we place limited value on that. It's extremely difficult to find value-added farm products (like meat and eggs) with even a small amount of real organic integrity. A big part of the problem is that consumers and farmers have contented themselves with organic window dressing. Certainly window dressing is a lot cheaper than real substance, especially when it comes to foods like pork and poultry. As long as “organic” consumers continue to expect the artificial cost savings of pesticide-intensive GMO grain, window dressing is all they'll get. But simply paying more is no answer either, unless the consumer actually knows what he's paying for. Consumers and farmers will have to work together over time (blurring the definitions of "consumers" and "farmers") to develop farming and distribution systems to replace the industrialized model. We think avoiding genetically modified foods and feeds is a challenging but very important goal -- only a first step to the requirements of the USDA organic system, which itself leaves much more to be desired. There's hope for much better food and much better farming, but that hope isn't hiding conveniently behind any of the buzzwords; that hope surely depends on real knowledge, involvement, and labor.
No comments: