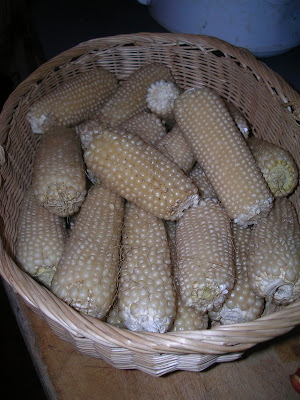 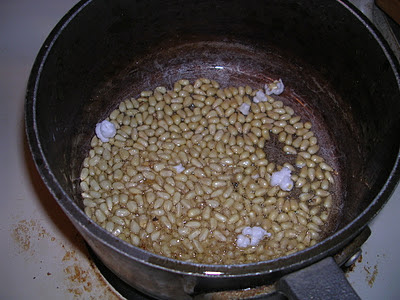 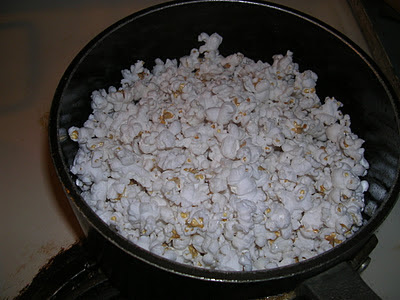 We grew a small crop of popcorn this year and are glad to say it's ready for you to pop up a bowlful for yourself.  If you've never popped popcorn on the stove top, it's rather easy.  Simply shell the popcorn off from the cob into a bowl.  Start at one end of the cob and rub the kernels off - they should come off easily.  You can also use an empty cob to rub them off.  Then heat about 2 tablespoons of fat on high in a pot.  When the fat is hot pour in the popcorn and slide the pot back and forth over the burner.  This will cover all the kernels with fat.  As soon as you hear the first pop, cover the pot with a lid, leaving a small vent on the side for steam to escape.  Keep sliding the pot back and forth to keep the bottom kernels from burning.  When the popping ceases, remove from the burner.  Pour into a bowl and add salt and butter as desired.  Though we haven't tested it, our popcorn should also pop in a popcorn machine and an air popper.  We hope you'll enjoy this homegrown snack food.
No comments: 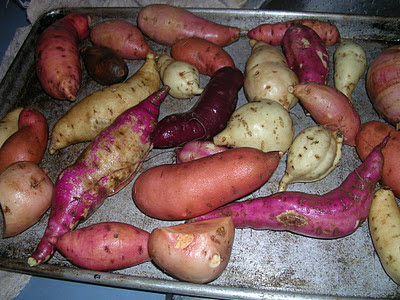 We were glad to get the sweet potatoes dug last week before the wet weather and the forecast frosts.  We grew over a dozen varieties this year including many new ones given to us by a friend who grows over a hundred varieties.  They are a beautiful colorful assortment.
1 comment:

A couple years ago we read about a USGS survey of large- and smallmouth bass that covered river basins all across the country.  This survey found that a third of all male smallmouth bass and a fifth of all male largemouth bass were intersex, meaning that the male fish also had partially developed female parts.  (This is equivalent to boys with breasts!)  Intersex fish were found at sites both with and without obvious sources of endocrine-active compounds, such as household chemicals (laundry detergent, shampoo...), pharmaceuticals, pesticides, and heavy metals, that are associated with dense human populations or industrial and agricultural activities.  The survey found intersex fish in every river basin examined except for one river basin in Alaska.  Intersex traits were most prevalent in largemouth bass in the Southeast, where they occurred at every site tested, including very high percentages at sites from our own Pee Dee River basin.  What's especially interesting to us about this story is that no one really knows why it's happening.  We know from frozen samples of fish from 50 years ago that it's a new thing: some kinds of modern human activity are clearly causing the abnormalities.  We know it's happening, but we don't know the mechanism or the specific causes.  Whatever is causing these dramatic changes in fish is in the same water that most (or all) of us are drinking.
We see clear lessons to be drawn from stories like the intersex fish when it comes to how we should farm.  Most important, these stories tell us that the “smart,” educated use of chemicals and pharmaceuticals and heavy metals, etc. involves a whole lot of false confidence and risky ignorance.  In other words, we believe the smartest “use” of agricultural chemicals and pharmaceuticals is generally to completely avoid them.  We think it would be absurd to say that even if particular genetically modified crops haven't yet been proven harmful that they have any scientific claim to being safe.  There are plenty of known costs to agricultural chemicals and pharmaceuticals (hypoxic “dead zones” in the ocean, the breeding of antibiotic-resistant bacteria, the loss of beneficial insects, dependence on foreign oil, dependence on rapidly depleting resources, etc., etc.), but we suspect the costs we *don't* understand are just as great.  It comes as no surprise when we read that the only thing dwarfing modern cancer rates is the rate of increase in the price of cancer treatment.  Intersex fish are one clear example that scientifically proven harm is coming from our “scientifically advanced” way of life, yet “science” can't offer solutions to these kinds of problems.  When it comes to farming (which is closely tied to everything else), the solution we see is to build deep ties with small, diversified farms committed to building thorough alternatives to the “scientifically advanced,” chemical-intensive norm, because small scale and diversification set the foundation for solving problems without chemicals and pharmaceuticals.
No comments: 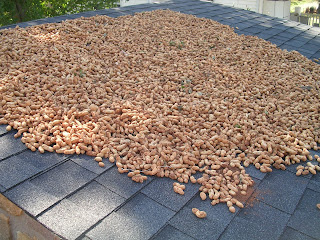 Thanks to our most recent visitors, Marilyn and Jelson, the peanuts are harvested and drying on an outbuilding roof.
2 comments: 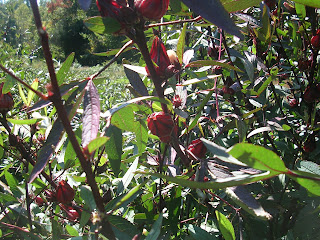 We're very excitable when it comes to new farm ventures.  Of late, Eric's been intently researching cold-hardy citrus in the hopes of having some taste of local citrus someday.  Today, though, we're excited to share with you the harvest from a new to us plant that has done great here.  A friend gave us a few Roselle seeds this spring and this fall we have plants loaded with their 'fruits'.  A member of the hibiscus family, this okra relative grows to a huge beautiful bush, about 4 feet in diameter.  Along the dark red stems grow short lived hibiscus like flowers.  When the petals fall off, a thick calyx is left behind.  These flower parts are then harvested for a number of uses.  Mostly commonly, they are used for a red 'Koolaid' colored tea.  Roselle is actually one of the main ingredients of Red Zinger tea.  They can be used fresh or dried for tea.  While we enjoy the tea, roselle also makes a great mock cranberry sauce.  Just boil the chopped red pods with a little water, honey and maybe ginger.

Cooler weather means planting time - for garlic, shallots and multiplier onions that is.  We're about to put ours out and if you'd like to set some out yourselves we have plenty of 'seed' to get you started.  All three of these alliums are planted in the fall here in NC and then overwinter and are ready to harvest sometime in May and June.  They are all planted similarly about 6-8 inches apart.  We grow ours on beds containing four rows.  After the first shoots emerge, we mulch them with hay or straw.  This helps keep the weeds down and also gives a little winter protection.  All will put on a little fall growth, then go dormant a bit through the worst of winter and start growing strong in late winter.  All of them can be eaten as soon as you have a craving in late winter as green onions or green garlic.  To plant garlic, break the head apart into cloves and plant pointy side up about an inch and half deep.  Each clove will produce a head of garlic.  For the shallots and onions, break apart what is easily broken apart.  Small shallots and onions will produce fewer but larger shallots and onions the next year, while planting larger shallots and onions will produce more but smaller sized shallots and garlic.  There are some pictures of our allium patch in some older posts on our blog.
3 comments: