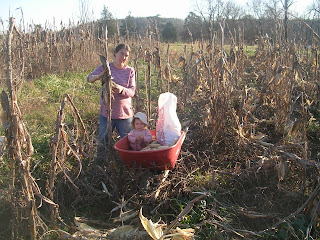 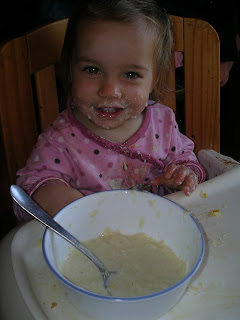 We recently finished harvesting our open-pollinated white corn.  The shucked ears are now drying in the corn cribs.  We've enjoyed incorporating cornmeal and grits into our everyday diet.  Corn mush has become a favorite breakfast food.  It's quick easy and delicious, similar in taste and texture to cream of wheat.  We cook ours in a ratio of one cup of cornmeal to two cups water and two cups of milk with some salt to taste.  Cook until thick, about 20 minutes.
1 comment: 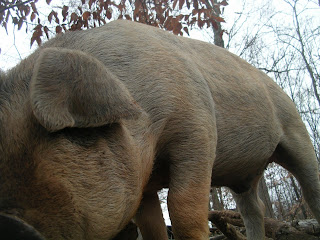 Our two pigs are eating a lot and growing incredibly fast.
No comments: 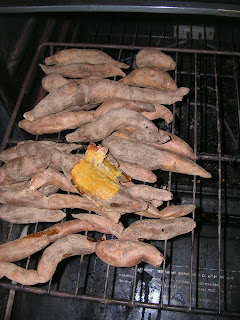 Lately, we've been enjoying our little sweet potatoes.  Maybe it has to do with the increased surface area of sticky sweetness.  When we need a quick meal, we'll fill the whole oven with the little guys.  At 400 degrees it doesn't take long.  They are easy to peel.  When we cook a mix of colors, the kids have fun peaking under the skins, trying to find their favorite kind (the pale orange Porto Ricos).  Then any leftovers go in the fridge, a wonderfully easy snack.
No comments: 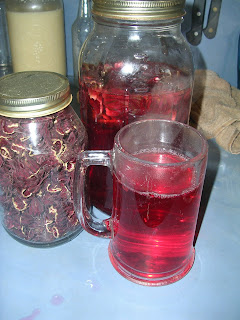 With the cooler weather and a bit more relaxed schedule we've been enjoying some homegrown teas.  The dried roselle/hibiscus makes a beautiful red tangy tea.  Mint is our other favorite, made with dried peppermint.  Both of these we lightly sweeten with honey.  This year we planted two Rosa rugosa roses as they are known for their large rosehips good for tea.  And we also planted a Camellia sinensis, the camellia from which black and green tea is made.  We continue to search for more good tasting tea plants.
No comments:

There are some marginal options for our CSA members to customize their weekly CSA shares, which would certainly affect what the share would look like, but here's a link to a series of photos taken at random times during the Vegetable CSA season of CSA shares (shares for which there weren't any custom requests) to give you an idea of some of the things we grow and how shares change according to the time of year.
No comments:

Do we farm organically?