We've talked before about big business lobbyists distorting the organic rules to allow synthetic additives, about outright fraud followed by organic certifying agencies arguing for the safety of chemicals used on produce they're certifying as organic, about rules that allow organic "farms" to operate as confinement feeding operations without growing anything at all (and therefore not feeding anything green or fresh to their animals, etc.)  In addition to the structural problems with the USDA organic system there are, of course, also all the little stories of farmers that take the easy chemical solutions to their problems when no one is looking.  We bought some USDA certified organic buckwheat recently and noticed afterwards that the bag said "product of China."  (We need to figure out how to harvest our own buckwheat! [In 2014 we grew enough for our own limited use, and now, as of 2015, we're offering shares of buckwheat we grew as part of our Full Farm CSA].)  Of course, it's absurd for China to ship staple grains clear around the globe to the US, but it also strikes us as wishfully absurd to think that organic integrity can survive that kind of supply chain.
But those are just the most superficial problems we see with the USDA organic system.  We could go a step deeper and argue that USDA certified organic farms shouldn't be allowed to directly support the production of chemical-intensive, genetically modified soybeans in order to use the soybean meal on their fields for fertilizer (which is quite common practice.)  Perhaps you'd want to tighten the rules so as not to allow for organic farmers to directly purchase conventional crop products like that, but where then do you draw the line?  If it's not okay to use GMO soybean meal, is it better to feed GMO grains to conventional beef in concrete feedlots or to hens packed thousands or tens of thousands to a building and process bloodmeal or feathermeal from those operations instead?  Or to even simply use that manure?  Of course, there's nothing inherently unnatural about soybeans or blood or feathers or manure, and a fully organic system would incorporate all of these things in one way or another without sending them to landfills or dumping them into rivers and streams.  The fundamental problem here may very well be that the USDA system really isn't any kind of alternative "system" but rather an inseparable offshoot designed to accommodate the mainstream consumer model.
Before we bought our first couple of feeder pigs we read a publication by an organic agricultural extension service on how to organically control intestinal worms in organic hog production systems.  The answer was to maintain a carefully timed model that would allow for routinely medicating all sows in the first trimester to optimize the loophole in the USDA organic rules.  Organic poultry demonstrates even less systemic integrty: USDA organic poultry farms aren't given any reason to incorporate reproduction into their farms at all.  The whole process of raising breeding stock, laying and hatching eggs, etc. is simply left to the conventional mainstream and then 7 weeks later the bird is legally sold to the consumer as USDA organic.  The USDA organic response to chemical and pharmaceutical use is not to develop an alternative system but rather to outsource their use.
So how would one develop a real alternative to our dependency on chemicals and pharmaceuticals?  We think the most important part of the answer is to shorten supply lines and rebuild connections between eaters (consumers) and the land that feeds (and clothes and houses) them.  Instead of putting a seal of approval on buckwheat from China we want to build relationships that can foster organic agriculture in our community, relationships that we can trust to deliver real integrity.  Probably our biggest and most basic objection to the USDA organic label is that it's all about replacing community-based trust with trust in bureaucratically governed certifying agencies.  The organic label is designed to replace the need to personally know anything about where or how your food was grown.  The trend in organic agriculture has certainly been overwhelming in the direction of larger scale, more heavily industrialized, and greater distances between consumers and the source of their food since the USDA rules took effect, and that's no accident.  In more respects than we can list here, the USDA rules have given the edge to the industrial-scale producers.  Is it any wonder that industrial abuses are the result?  If how food is farmed matters (i.e. if we're going to take on any organic concerns), then the first step to organic integrity is to know more of where and how and by whom food is grown.
1 comment:

Mid-March is a very busy time of year on the farm.  There are onions, lettuce, and other greens to transplant, spring crops to seed in the garden, potatoes to plant, summer crops like tomatoes to seed in the cold frame, ground to work up...  The bees need attention; we try to keep the bees from swarming along with making up colonies for next year.  The grass is starting to grow, so we set up fences in the pasture for the cattle and goats.  The mushroom logs need to be stacked.  Then there's the winter projects we try to finish up before it's too late - like spreading manure or picking up firewood before it gets lost in the growing grass. 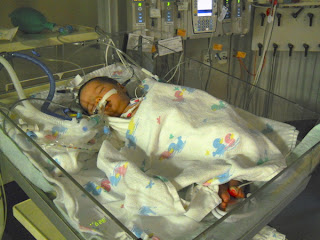 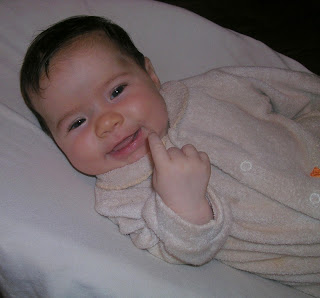 Suddenly, mid-March this year, everything on the long to do list was put on hold.  Christina, our then 7 week old baby, developed a serious case of a respiratory infection (RSV).   For 7 days, she was on a ventilator in the pediatric ICU, followed by another 3 days in the hospital.  It was a harrowing experience.  Yet, God was abundantly merciful, and Christina is now completely fine.  Just a few days shy of 3 months, she is a happy growing girl.  We are so grateful.  We too were well cared for during her hospital stay.  We were richly blessed in prayers, visits, meals, offers to help, gifts, and phone calls from our friends, neighbors, and family.
But what happened to that long mid-March to do list?  What about the farm?  Where are we at?  By God's provision, we're about as caught up as ever.  Of course, on a farm, you're never caught up!  But the spring crops are coming along with some of them even ready to harvest, the bees are making honey (earlier in the year than they ever have due to the hot spring we've had), the cattle and goats are out on pasture, and the firewood is mostly picked up.  And most important, the children are well.  That said, losing a week and half at a busy time of year does have consequences - some crops are probably going in a bit later than they otherwise would have, a few more hives swarmed than they might have otherwise, etc.  So we've decided, if anything doesn't go as we'd like this year, we'll just use this as our on-going little excuse.
2 comments:

Some 6 inches of straw with tarps on top wasn't quite enough.  Last week's cold nights nipped some of the early strawberry blossoms and fruits.  The unseasonal warm weather this past month had many of our fruits blooming and leafing out well ahead of schedule.  So when the temparture dropped to 27 degrees (or possibly lower) last Wed. night, our best efforts weren't quite enough.  That said, many of the strawberry blossoms were fine and we expect many more blossoms and fruit to come.  And it looks like some of the tree fruit survived too.
No comments: 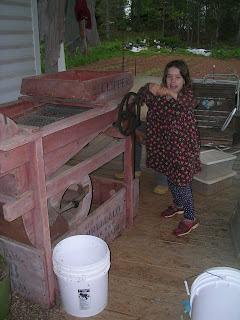 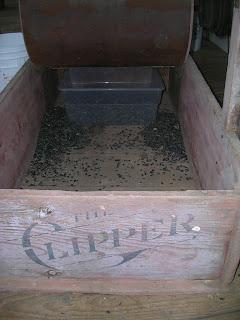 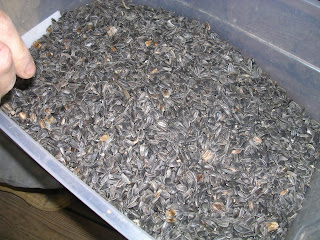 Some of the most useful equipment for farms like ours is rusting away in woods or forgotten in the back of old barns.  Fortunately for us, a local farmer responded to our ad for a used seed cleaner.  Though it still needs some minor repairs it is in great shape and did a great job on our first effort at using it.  We ran some sunflower seed we'd saved through it and in no time had a tray of sorted and winnowed sunflower seeds.  We just need to make some more screens and then we'll be ready to go, cleaning our wheat and dry beans.  Useful technology is never out of date.
No comments: 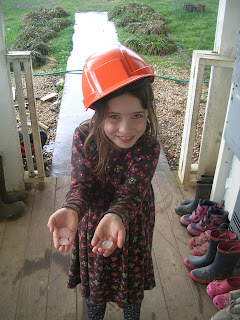 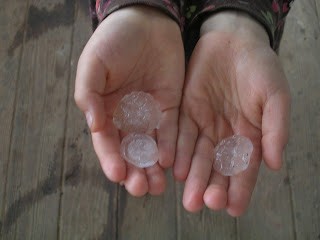 A recent hail storm dropped quarter size hail that had us running out in hard hats to cover our glass cold frames with blankets.  Fortunately, we didn't suffer any damage.
No comments: