A cover crop is a crop not grown for the sake of harvesting but rather to benefit subsequent crops. Because we don't use any synthetic fertilizers cover crops are especially important to us for the role they play in "fixing" atmospheric nitrogen and retaining and recycling nutrients from previous crops. Of course one of the most important functions of any cover crop is to keep the soil covered, therefore protecting the soil from erosion. For summer cover crops this year we planted sunflowers, cowpeas, and buckwheat. We really enjoyed the sight of all the cheery sunflowers, and the bees sucked up their nectar along with that of the buckwheat blossoms. Currently we're planting crimson clover -- another pretty flowering cover crop -- and small grains (barley, oats, and rye). Crimson clover, like cowpeas, is a legume and a nitrogen fixer so it is an important cover crop to precede nitrogen-hungry crops like corn. Small grains, in contrast, are great in terms of the amount of organic matter they add to the soil and their general improvement of soil tilth. Small grains also offer succulent winter grazing for our milk cows to enjoy. A neat concept we're still trying to work out is the use of oats as a winter-kill cover crop. Potentially oats can yield much of the value of any small grain in the fall and early winter before dying back to a straw like mulch on the soil surface. This offers the possibility of planting directly into the dead cover crop without tilling first. If this doesn't work as planned, we may harvest some oats next spring.
No comments:

That's a grandiose question, but implicit in the big question is whether farms like ours are frivolously inefficient or whether they're a model worth supporting because of their better care of people, communities, and ecosystems.
Certainly big, industrialized farms free up/displace lots of workers. Lots of small, family farms would require lots of farmers and that means fewer people doing other jobs. A shift to small family farms might come about in part by farmers replacing workers in pesticide manufacturing plants or global food transport workers or food marketing specialists, but that would only be a part of the shift; small farms can really only become mainstream in America to the extent that mainstream Americans become farmers again.
But what if the workers were willing and able? How much food could such farms even produce? To try to answer that question, we must confront the reality of synthetic fertilizers. In the case of garden crops, which take up very little land, there are reasonable alternatives to synthetic fertilizers, particularly in the presence of all the organic waste materials that our current economy generates. On the other hand, the yields of the crops that take up a lot of land -- the crops that ultimately really feed the world -- depend much more heavily on synthetic fertilizers. Synthetic fertilizers allow for supplying practically unlimited nutrients to crops, at least so long as the fossil fuels and other mined nutrient sources required to synthesize the fertilizers -- fertilizers are a major part of our entire fossil fuel consumption -- are plentiful. Growing crops organically means the only nutrients available to the crop are what can be recycled (through manures, kitchen scraps, animal bones, mulches, etc.) When it comes to the crops that produce the calories that feed people, crops like corn and wheat and oats and forages for livestock, synthetic fertilizers make a huge difference, perhaps doubling potential yields per acre or even more.
Does that mean small, organic, family farms could only produce half the food as big, industrialized farms (and would be at least twice as expensive)? Some of big ag's proponents might suggest that, but that ignores the great efficiency with which small, diversified farms can make use of land, land that is too sloping, too varied, or divided into plots too small to suit big machines and extensive management. Even vacant lots in large cities have proven fertile ground for small, organic farms and gardens. Our own farm was long ago abandoned by mainstream agriculture as too marginal; yet to us it offers overwhelming potential production. The biggest difference may be that small farms are so much more flexible in terms of how they can convert sunlight into food. For example, instead of growing (and devoting land solely to) genetically modified, herbicide-resistant soybeans for chicken feed, free range chickens on small farms can scavenge 100% of the worms and grubs they need for protein, along with much of their energy needs, all from land devoted primarily to other uses. Hogs, similarly, are wonderful at utilizing what would otherwise be waste: crop residues from the field, acorns and beechnuts from forests, leftover whey from cheesemaking, etc. The dairy goats we bought this spring, as another example, have thrived all year on nothing but unwanted weeds in fencerows and along the edge of the garden. In contrast, industrialized agriculture devotes a majority of America's most productive cropland strictly to growing animal feed. How uneconomical!
Even if a predominantly industrialized agriculture can currently more or less feed the world, one must ask whether current practices can be sustained. What will industrialized agriculture do without cheap and abundant fossil fuels for its machines and for synthesizing its fertilizers? What will industrialized agriculture do when the weeds and insects and disease organisms develop resistance to the current array of synthetic poisons? Of course, the only answer is blind faith in the prospect of newer and higher-tech poisons and machines, meanwhile assuming that the pollution and side effects of yesterdays poisons will prove negligible. As for us, we maintain hope in a different kind of agriculture, a culture of small, organic, family farms.
1 comment:

The Value of Small 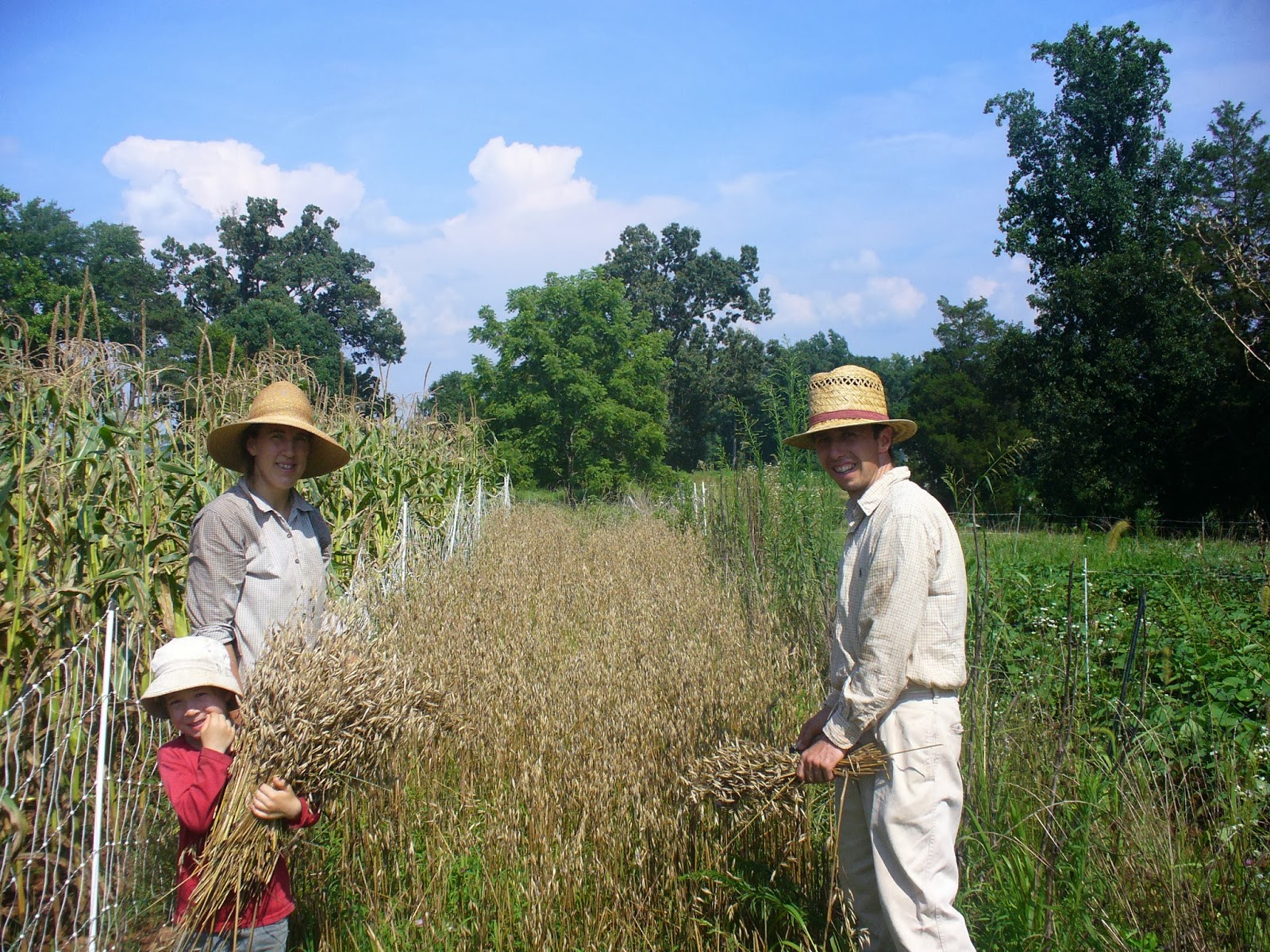 We've been harvesting peanuts lately, digging the vines and then hand-picking the nuts off. We gained a little efficiency by cajoling Eric's parents into helping while they were visiting last week, but what took us several man-hours would be accomplished in a matter of seconds by a conventional farmer. Of course, the conventional farmer has to finance hundreds of thousands of dollars of special machinery, along with paying for fuel, whereas all we have invested in harvesting is labor, but more than enough cost advantage remains to have all but eliminated small-scale peanut growers. So why do we hand-harvest peanuts, hand-milk a cow, or hand-pick feed corn? What's wrong with labor-saving machinery? In theory, there's very little wrong with labor-saving machinery, and we use plenty of machines on our farm: a honey extractor, a grist mill, an old tractor, an electric butter churn, etc. -- but where machines have displaced small family farms tremendous harm has been done. We could stand up for the small family farm on many, many fronts, but where we want to focus our attention now is the question of consumer choice. How many other changes have accompanied the shift from diverse family farms to industrial-scale monoculture? If the connection between people and the source of their food hadn't been severed by labor-saving machinery, if communities had retained direct control of how their food was grown, would you have chosen to give artificial hormones to milk cows for a marginal production boost? Would you have chosen genetically engineered corn? Would you have chosen high fructose corn syrup as a sweetener? Would you have chosen to feed chicken litter to your cows? Would you have chosen the fruits and vegetables with the better shipping quality over the ones with better flavor? Would you have chosen to offer the kind of employment fit only for an immigrant underclass? Would you have chosen routine antibiotics for your livestock? Would you have chosen Chinese concentrate for your apple juice? Whether or not you object to these choices that the system made no longer matters, because you're not given any choice. And that's one very big reason to value small, locally controlled farms.
No comments: