What's happening on the farm 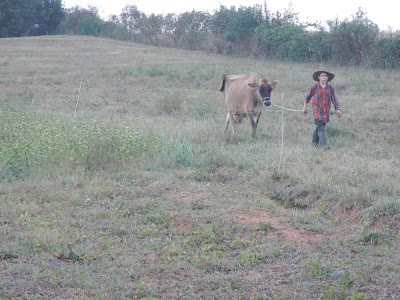 It hardly seems worth mentioning that it's dry.  It's hardly rained since June.  And now that it has cooled off, we're actually enjoying the day after day of sunny weather.  But we don't have to look far to remind ourselves that it's dry.  There's the sprinkler and soaker hose going constantly in the gardens on the remaining crops.  Moving sprinklers and hoses has just become a regular part of our life, something we do every hour or two all day long almost every day, week after week (kind of like changing diapers, except that the baby gets diaper changes even on Sundays.)  We had a scare a week ago with our well but after some trouble shooting we realized the problem wasn't with the well or even the pump but just the switch on the pressure tank.  Then it fixed itself, but even if we have to completely replace the switch that's no big deal.  So we continue to work our well about as hard as we can every day.  But it's hard to get enough water to everything.  In the greens patch, you can see something like crop circles with lush large green leaves inside the circle and scorched small withered leaves where the plants were just out of the sprinkler's reach.  We have a fairly small fall garden, in part because of our early September baby, but in larger part because we knew we'd only be able to water so much ground, so we postponed planting more, waiting for rain that never came, at least not in time for more fall crops.  But we expect the dry weather, if it continues, will actually make easier work of the big root crop harvests that need to happen over the next few weeks: the peanuts and the sweet potatoes.  And the garden season is almost done.  It's been a good year, the pantry is full.  Rain would be nice, but by now it's too late to make much difference for this year's crops.
The pasture on the other hand, could really, really use some rain.  In October the cool season grasses that are dominant in our pastures should be putting on some of the nicest growth of the whole year.  Fall growth is often abundant, and as an added bonus, it can be stockpiled for winter grazing.  While it won't grow any more in the winter, the grass holds most of its nutritional value and the animals can be gradually let in to eat it, strip by strip, saving the expense and time of feeding hay.  Sadly, unless we get rain very soon, we'll have practically no fall grass at all, and it's already too late for abundance.  We're already offering the cattle hay as they finish up the last stubs of green out in their rotation.  To compensate for what looks like will be a long hay feeding season, we've secured enough hay from a neighbor to hopefully make it through the winter.  We're wondering how precious hay will be in our area this winter.  Fortunately, there was plenty of moisture this spring, but this spring it was hard to find a good stretch of dry weather to cure the hay.  We've been reducing animal numbers lately, butchering some goats and one steer sooner than we might otherwise have and selling a couple goats we might have otherwise kept at least a while longer.
And with no rain in the forecast, we've begun to wonder about the wheat crop.  It's about time to work up the ground and get the wheat seeded.  We'll keep an eye on the forecast and hope for a wet window to make that happen.
Even if you're not a farmer, you probably remember how wet it was last year, apparently the wettest year on record, and that actually continued into the early part of this calendar year, but now we're going on four nearly continuous months of very dry conditions.  It seems like our crops have suffered worse from dry spells in previous years, but this has got to be the longest continuous dry spell we've seen in our not-too-many years of farming, at least during the growing season when it really matters.
A crop we're especially enjoying this year is the peppers, especially some of the less common varieties: the little orange snacking peppers, the long slender red frying peppers, the strangely addictive little green shishito peppers... The peppers are doing well, but we're nearing the end of their season.  Try some of these less common varieties if you aren't already familiar with them!  There are some other very enjoyable and unique sweet peppers besides just bell peppers.